In August of 2011, I went to the Art Gallery of Ontario for an exhibit on Abstract Expressionism before accidentally stumbling upon the beautiful work of artist Kathleen Munn. The Rothko’s at the Abstract Expressionism exhibit were even more transcendent than I ever thought they could be and I also found a couple of artists to admire that I hadn’t heard of before, but it was Kathleen Munn who continues to hold court in my mind. 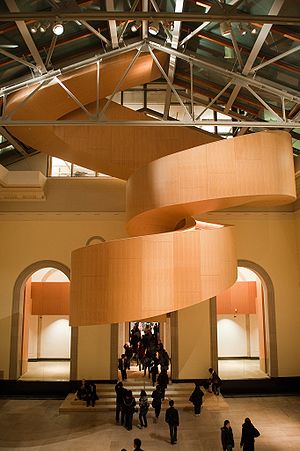 After I finished viewing the exhibit feeling reinvigorated I descended the magnificent staircase of the Frank Gehry-renovated building and set out to find the abstract lithographs that were mentioned inside the exhibit despite quickly running out of time before the museum would close. On my way to the lithographs I took the best wrong turn.

Upon entry to the wrong room I was struck by the brightest most beautiful cubist painting I’d ever seen. I looked at painting after painting; drawing after drawing all the while thinking to myself, “Why have I never seen any of these before?” I didn’t realize it was it’s own exhibit of just one artist instead of a mishmash of the Art Gallery’s collection so I kept looking at the labels on the wall. Suddenly I realized every single magnificent piece of artwork in those two large rooms was created by an artist I’d never heard of– Kathleen Munn. It was then and there I decided I had to know everything about her. Luckily I turned around and behind me was a huge biography on her life and artwork. Obviously.

Still Life with Pear, Apple and Jug by Kathleen Munn

Still Life with Vase, Pear and Bowl by Kathleen Munn

So who was this mysterious artist, Kathleen Munn?

Kathleen Jean Munn was born in 1887 in Toronto, Canada. At a young age her grandmother, an amateur painter herself, recognized Kathleen’s talent for art. By 1912 she was sent to New York City to study at the Art Students League where the Modernist movement was developing all around her.

She became inspired by Post-impressionist artists like Paul Cezanne and Henri Matisse and began to delve into landscapes with a post-impressionistic spin later exploring a more modernist artistic approach. In 1920, Kathleen took off with her sister and traveled to Europe to take in the masters and this is said to be where she began her quest to express spiritual and religious stories through modernist techniques and applications.

In 1928 she was invited to show her piece, Composition, with the Group of Seven in Paris and it was during this trip that she became heavily influenced by Cubism having gained more exposure to Picasso and Braque. She spent the subsequent years doing what she considered her best work: The Passion Series, depicting the death and resurrection of Christ. She never felt fully comfortable being completely abstract and felt art should express a larger purpose. In 1939, the public still unresponsive to her output and obligations to the family business forced her to give up on her artistic aspirations.

“I am very hopeful that some day my art will be rediscovered.” -Kathleen Munn, 1974

Despite showing with the Group of Seven, the conservative Toronto art scene did not know what to make of her artwork given how unique and disjointed it seemed in comparison to popular Canadian painters who mostly painted landscapes. What is special about Kathleen is that she was the first to embrace Cubism in Canada and one of the first to grasp Modernism at all in Canada. Instead of changing her art in order to be accepted she continued to explore new concepts including dynamic symmetry and Denman Ross colour theory.

The more I read about her the more I like her. She did not enjoy the status quo and she was downright obsessive to learn new and better methods as witnessed in her notebooks. The one thing the Toronto critics did admit is that she was highly skilled and had mastered technique.

I left the exhibit promising myself to go back and see it the next weekend. Unfortunately, like always, I was too busy to go back before the exhibit closed but I find myself thinking about her and her artwork often. So often that now six months later I felt the need to write about her. But that’s what good art does. It stays with you.

Do you have an artist like Kathleen Munn, obscure or otherwise, that you haven’t been able to stop thinking about since you discovered them?

Rose Lagacé is a production designer for film & television by day and an emerging filmmaker by night. Rose is also the creator and editor of Art Departmental where she celebrates the art and craft of production design.

This site uses Akismet to reduce spam. Learn how your comment data is processed.

Join our 45k+ followers! Subscribe to our newsletter to receive exclusive updates.